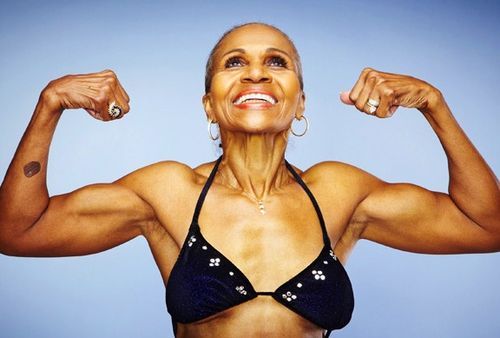 This grandma can lift more than you

Some grandmothers bake cookies, some crochet, and some still work the 9-5 grind, but not too many can claim to lift more than the weight of most men in their 20s. Meet Edith-Wilma Connor – mother, grandmother, and great-grandmother extraordinaire and Guiness Book of World Records holder.

In May 2012, just in time to celebrate Mother’s Day, Edith-Wilma Connor of Denver, reached for and won an unusual honor for her age.  She was named the Guiness World Records’ “Oldest Living Female Bodybuilder”, after she competed in the NPC Armburst Pro Gym Warrior Classic Bodybuilding Championship. Yes, you read that correctly, at 77- years old then, now 83, Edith-Wilma Connor is a competitive bodybuilder, business owner, mother, grandmother, and great-grandmother.

According to CBS News Sporty Seniors, she won first place in the first competition she entered – the Grand Masters in Las Vegas – on her 65th birthday. It takes some people a number of years to reach this level and some never do, but Mrs. Connor? She was a spring chicken, getting her bodybuilding start in her early 60s, when she thought her data entry job made her too stagnant. Twenty years ago, her data entry business kept her at her desk up to 10-hours a day. She needed to move, so she took up bodybuilding.

In last year’s Viera Voice article, in the Senior Living section, Connor explained, “It was a tension releaser. I sit at a computer all day, so it was one way for me to take it out on the weights instead of the employees.”

In addition to her above routine, she does step-aerobics with her great-granddaughter. Her oldest grandson is her personal trainer, and armed with her own personal trainer certification, she shares her knowledge as a coach for an over-50 group of women with a focus on the mature body.

With advancements in modern medical technology, the rise of healthy living at every age, and a new lease on life for independent seniors, we have more time than ever to connect with our elders. We all have goals, aspirations, family and expectations, and we are constantly on the lookout for stories to inspire and drive us. Life doesn’t end at 65, 70 or even 100 for that matter. For some, over 60 is only the beginning.

Are you 65 or older and have an amazing story to tell? We want to hear from you. We want to hear stories about seniors that break the mould, think Edith-Wilma Connor 83-year old competitive bodybuilder and Guiness Book of World Record holder. Or maybe someone like Hiroshi Hoketsu, oldest athlete in the 2012 London Olympic Games, now eyeing the 2020 Tokyo Olympic Games as a horse jockey. These are just a few ideas to get you started.

Do you know any amazing older adults that we can feature on our Blog?   Let us know in the comments below.