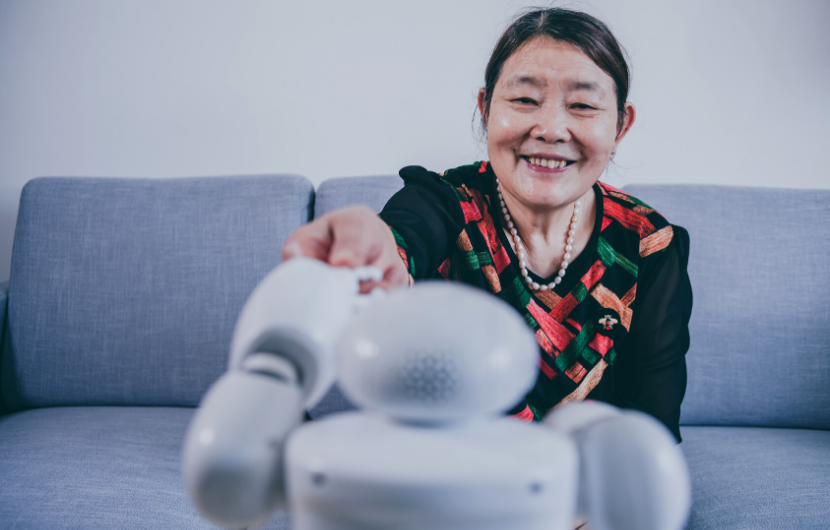 Social isolation is worsening and detrimental to seniors’ health. Dr. Nancy Jecker embraces robot companions as an answer for the aging and loneliness in the age of AI.

Companion robots can help the elderly age in place better and longer, and provide much-needed social interaction and even physical affection, according to Dr. Nancy Jecker, a professor of bioethics and humanities at the University of Washington School of Medicine in Seattle.

Jecker has been studying aging for decades and she sees a future of robotic technology integrated into the social lives of older adults in many supportive ways, including supporting emotional health and wellbeing and countering against ageism.

“Future robots could be designed to help alleviate the unmet social and emotional needs of older people. This could include being available 24/7 to serve as friends, caregivers, confidantes, and sexual partners,” said Jecker, who was interviewed by Custodia.

“Being socially isolated not only feels bad, it literally makes people sick“

The bioethicist has witnessed the declining ranks of workers to help care-dependent older adults and the rapidly growing ranks of senior citizens who are living longer but are isolated. “Far more than any other age group, older people are socially isolated and lonely. Being socially isolated not only feels bad, it literally makes people sick,” and is strongly associated with an increased risk of dying, Jecker said.

Robot-human relationships can fill a void and serve as an important new alternative to human-human relationships, said Jecker. She has written extensively about some of the key roles sociable robots can play for older people as caregivers (carebots), friends (friendbots), and in her most recent paper, as sexual partners (sexbots) and intimate companions.

Jecker published a paper in the Journal of Medical Ethics entitled “Nothing to be ashamed of: sex robots for older adults with disabilities.” She is also the author of the E-book and print book: Ending Midlife Bias: New Values for Old Age (Oxford University Press, 2020).

According to Jecker, robots are already increasingly emotionally intelligent and capable of serving as friends and companions. They can relate to us on a personal level, read our non-verbal cues, sing, play games, and be good companions. “This matters because sexual fulfillment is not just about physical satisfaction, it’s about being in a relationship and affiliating.”

These robots present the possibility of forming a relationship and feeling close to another, which differs from other assistive devices, she said. Future robots will be able to touch, rub, hug, pat, and hold hands with older people without causing injury. “A promising new field of research is soft robotics. Soft robotics mimics soft-bodied creatures in nature, replacing hard metallic surfaces of traditional robots with softer, pliable surfaces.”

She added that soft robots will be safe for older end users who, as a group, tend to be more frail, less agile, have worse balance, more porous bones, and less muscle mass. “This would all represent a massive rethink on our part regarding how we view ageism, sex and seniors, and robots as friends/lovers.”

“… since people tend to attribute race to humanoid robots, we should deliberately design robots to cater to a racially diverse clientele.”

Today’s sex robots are sexist, racist, ableist, ageist, and heterosexist, she said, and her latest paper is a bid for reimagining them. “From an ethical perspective, we need to support human dignity and to take seriously the claims of those whose sexuality is diminished by disability or isolation. Society needs to make reasonable efforts to help them.”

She hopes that future robots will target more diverse end-users, including people of all ages, genders, abilities, races, and cultures. “For example, since people tend to attribute race to humanoid robots, we should deliberately design robots to cater to a racially diverse clientele.

“As robots become increasingly integrated into our homes and workplaces, they bring with them implicit social norms and values. They have the capacity to rapidly reproduce and reinforce implicit social biases or to expand people’s thinking to be more inclusive,” she said.

Robot-human relationships can enhance our quality of life and support human social needs in important ways.

We could take a cue from our Japanese counterparts, offered Jecker. Some Japanese end users may find it easier to bond with robots compared to their Western counterparts. They may be less likely to think of robots as “empty” inside.

“We can learn from the Japanese to avail ourselves of the rich possibilities human-robot relationships will increasingly offer. Robot-human relationships can enhance our quality of life and support human social needs in important ways. They will not be the same as human-human relationships; they will be something else.”